Ajinomoto Cambrooke (expansion of Cambrooke Foods) was originally founded in 2000 by Lynn and David Paolella, the parents of two children diagnosed with a rare disease called phenylketonuria (PKU). PKU is one of the few genetic diseases, which is managed almost entirely with nutritional intervention. The Paolellas’ goal in forming Cambrooke was simple - to develop improved nutritional therapeutic options for those with serious medical disorders.

Today, Cambrooke produces medical formulas and foods, for the management of a variety of medical conditions, and we are continually innovating new nutritional options targeted at a wide array of diseases.

Harley loves her formula (Tylactin RTD) and she acts like a kid at Christmas! 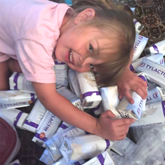 The Glytactin RTD Chocolate has a great taste, doesn’t have a gritty dry powdery taste. Actually tastes like an actual "milk shake".

I have MSUD, and thanks to Cambrooke, I have been able to increase the calories in my diet without increasing the protein, which has helped my energy, and focus in all areas-additionally it has helped me significantly in transitioning back to my MSUD diet after successfully giving birth to a healthy baby girl. Thank-you Cambrooke.

We have loved Cambrooke products and services for over 10 years !!!

Your products are excellent, customer service impeccable and shipping/delivery without fault. Thank you very much.

I appreciate how Cambrooke is really working with me on my PKU Diet. I feel as though we are a team.

If anyone is a chocolate strawberry fan, try a smoothie/ milk shake with strawberry BetterMilk, chocolate coconut milk, and some ice!!! It's like dessert for breakfast thank you for finally making formula... Anything but formula